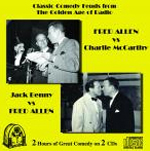 Fred Allen and Jack Benny had a running feud for the amusement of their audiences. First, each tells how they met. The stories aren’t at all alike. Jack takes a trip down Benny’s Boulevard and Fred puts on a Pinchpenny Show. Both appear in a preview of the they appeared in, “Love Thy Neighbor” – but who gets the top billing? In 1945, Charlie and Fred engaged in a month-long feud with great comedy that delighted their audiences. Charlie places an ad for a ventriloquist. Fred applies and gets the job. On their first audition, Fred gets hired – Charlie doesn’t. That starts a lawsuit that goes to court. This segment includes highlights of those shows. Plus: Edgar, Charlie and Donald Duck present “Jack and the Beanstalk”.