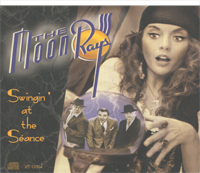 Swingin' At The Seance

Many people today are not aware of the Halloween songs from the Big Band era and before.

Here is a collection of songs from the 30’s, 40’s and before that bring out the spirits and memories of those great times. The Moon-Rays recorded these songs in 2008 with faithful respect to the original artists performances.