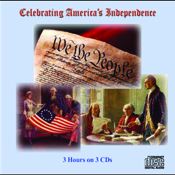 Download includes all Programs and a PDF of Original Cover

Celebrating America's Independence YOU ARE THERE (7-4-48) “Philadelphia, July 4, 1776...” CBS correspondents John Daly, Ken Roberts, Ned Calmer, Bud Collyer and Maj. George Fielding Elliott report from the Philadelphia State House on the final debate of the Continental Congress and the events surrounding its vote on the Declaration of Independence. Sustaining, CBS.

CBS RADIO WORKSHOP (11-2-56) "1600 Pennsylvania Avenue" is a biography of "that graceful yet indestructible symbol of our nation: The White House," with dramatized moments involving some of its many residents. Narrated by CBS reporter Alan Jackson. Sustaining, CBS.

TELEPHONE HOUR (7-2-45) “An All-American Show” with Donald Voorhees and the Orchestra and guest Bing Crosby, who sings a medley of folk tunes and “God Bless America.” Bell Telephone, NBC.

CAVALCADE OF AMERICA (7-5-43) “Listen to the People” written by Stephen Vincent Benet and starring Ethel Barrymore in a poetic examination of the United States standing up against the threat of fascism. Clayton Collyer announces